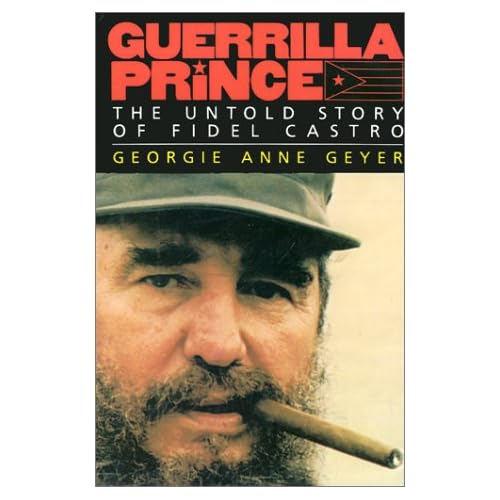 And old man river, he just keeps rollin', along...,


After seven years of exhaustive research Georgie Anne Geyer produced this 457 page book about Fidel Castro, one of the few remaining dinosaurs of the Marxist-Stalinist Cold War, Who still invokes communism as a governing policy. As readers of Casto's history are aware, he is at heart a murderous thug, the personification of that virulent alpha-chimp personage that can be found in every human society throughout history. His need to dominate and control his people supercedes any manifestation to the contrary putting him in the same category as a Hitler, Lenin or Stalin. Even a far-Left crank such as Noam Chomsky has averred that Cuba under Castro is a "Stalinist hellhole".

Geyer follows Castro through his entire life weaveing a surprisingly fair and balanced tale of a man who, while worshipped by Leftists, is abhorred by freedom loving conservatives whose lifestyle choices center around the touchstone of individual liberty. It's a remarkable tale of a driven, machiavellian man who, borne of not inconsiderable bravery, assiduously fights for, gains, and builds a power base 90 miles off the coast of the U.S.A. The fact that he murders and jails his own accomplices, drives his remaining countrymen into menial poverty, and becomes a player on the world stage, is all documented in this terrific book (readers of Armando Valladare's book "Against All Hope", can seamlessly interweave both narratives to form a fuller picture of Castro).

The sadness of this tale is that so few in America fully understand the cruelty of Castro and the murderous bent he shares with other, aforementioned, dictators of his ilk. The Elian Gonzalez saga was unfortunately made into a sideshow under the Clinton administration to the detriment of the truth. A more responsible press could have contrasted both sides of that issue.

That so many in America are still blinkered by Socialism's promise, of delivering unmitigated prosperity to the masses, is partial testament to why Castro has remained in control of his island prison for over 40 years. That free elections in Cuba don't exist, that hundreds of thousands have risked and frequently lost their lives making the 90 mile passage across the Caribbean sea, seems not to deter the Leftist faithful from worshipping at their self-constructed altar of Fidel. It's just too familiar a totem for them to jettison.

Geyer speaks Spanish, which helped when she interviewed Castro four different times. She also interviewed hundreds of other sources as part of her intensive research. It's made clear in this book that Castro's supporters fit the mindset in the song lyric penned by Paul Simon in "the Boxer" i.e. that a man hears what he wants to hear and disregards the rest. While Castro is a fascinating man by virtue of his political capabilities, many have been the plots to bring him down; and, to give him his due, he has survived them all well into his seventies.

This is an excellent look behind the veil of a charismatic leader who has done his best to preserve his image as a caring revolutionary bringing free education and healthcare to the those that Juan Peron called the "shirtless ones". For this his acolytes eulogize him. But, for those like Valladares, he will remain forever a heartless demon. Like many other books that have been under-promoted to the public, this one deserves to be recommended reading for all secondary and college students throughout the world.

Rafael_70
#2 RE: Guerilla Prince - The Untold Story of Fidel Castro

In Antwort auf: 6 of 20 people found the following review helpful:

This book is an embarassment to thinking people everywhere. The author makes goofy and wild charges (perhaps the worst was when she inquired whether Castro was the biological father of Cuban raft survivor Elian Gonzales!), gives no sources for them, and calls it biography.
Gee whiz.

She apparently viewed pre-Castro Cuba as some kind of paradise (80% illiteracy, a horrific gap between rich and poor, with the Mob's handpicked president Batista running the country from his offices adjoining the casinos) and modern day Cuba with more doctors per capita than the US, lower infant mortality than the US, same life expectancy as the US ALL accomplished without cash due to an embargo more extreme than the one against Iraq as some kind of terrible place.

Actually, rage is so much less on the island. They don't have soccer rage, air rage, checkout line rage, road rage there. The family structures are wonderful and intact, it's a violence free society for the most part (grandmothers are in the park late at night because the cocaine has vanished with the canine patrols) whose culture isn't dominated by Starbucks and McDonald's.

I know countless professors from the University system there who have had ample opportunity to defect but have chosen not to. But you'd never know this from reading this bizarre book.

The CIA has had 50 years to show the world what we can do in the Caribbean. In Haiti, our handpicked governments ranging from Papa Doc Duvalier in the 50s and Baby Doc Duvalier to Aristide have turned that country into a desperate nightmare.

I suggest that Ms. Geyer visit Haiti to learn first-hand what is possible with US government intervention in the Caribbean.